Many people are probably wondering what the new feature means in practice and how it will change our day-to-day email marketing tasks.

We gathered all of the most important details of the update to this article, in which we aim to explain the upcoming changes as simply as possible. Keep on reading to learn more!

What: Apple announced a new feature called Mail Privacy Protection as a part of their iOS 15 update. After updating their devices, users will be asked whether they want to turn the feature on or not, when they open the Mail app.

When: Officially, on September 20, 2021. However, marketers will see the actual impacts of the new feature after a while, as more and more users update their devices and turn on the new feature.

Why: Online users are increasingly aware of their user data and online privacy. GDPR and the end of third-party cookies, to name a couple, hinted at upcoming changes in the way we collect email marketing data as well. Now that Apple has announced its new feature, many big players in the field are likely going to follow in their footsteps.

Let’s first take a look at what Apple announced on their website. They say: “Mail Privacy Protection helps protect your privacy by preventing email senders from learning information about your Mail activity. If you choose to turn it on, it hides your IP address so senders can’t link it to your other online activity or determine your location. And it prevents senders from seeing if you’ve opened their email.” 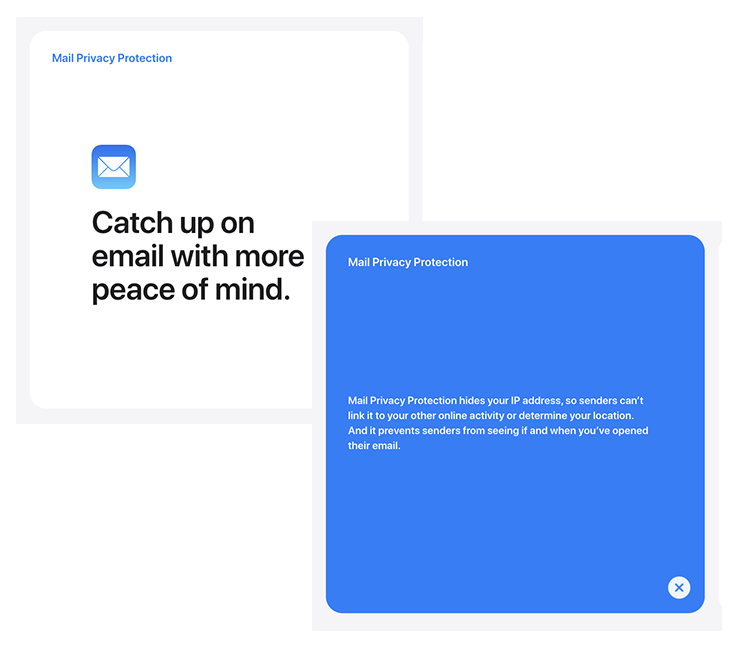 In other words, if your newsletter subscriber updates their Apple device’s software to the latest version (iOS 15, iPadOS 15, or macOS Monterey which will launch later on), reads their emails using the Mail app, and has turned the Mail Privacy Protection feature on, you will no longer be able to know

From now on, when you send newsletters to such users, it will seem like all of them opened the email, as long as it was successfully delivered to their inbox. You will therefore not be able to measure the newsletter opens of these users at all anymore.

Apple hasn’t announced how the technology works exactly. However, according to Litmus, Apple downloads the content of incoming emails into its own cache, from where they are then provided to users.

The content downloaded by Apple also includes the email’s tracking pixels that are there to detect the readers’ activity – in this case, opening the email. This makes the email service provider think that the recipient has opened the email, regardless of whether this actually happened.

As a result, your newsletters’ open rates are going to appear much bigger than they actually are, depending on how many of your subscribers read their email on Apple’s Mail app.

What do email marketers have to do because of the new feature?

Luckily, open rate is just one email marketing metric among many others. Although it’s commonly used in many organizations, it’s actually not one of the most reliable metrics out there, and its significance is only expected to decrease in the future. If you haven’t really paid attention to other email marketing metrics until this point, now is a perfect time to start!

Tracking newsletter clicks, for example, works just the same as before, so make sure to keep an eye on your newsletters’ click-through rates (CTR). CTR gives you an idea of how many of the people who opened the newsletter were actually interested in the content – and not just the title.

Learn more about CTR in our article What is Good Email Marketing Click-through Rate (CTR) & How to Improve It?

In our The State of Email Marketing 2021 study we found that other commonly used email marketing metrics include the unsubscribe rate, deliverability, conversions, the number of new subscribers, bounce rate, and email marketing ROI.

2. Go through your automation chains

If you utilize marketing automation, it might be a good idea to go through your automation chains, and edit them slightly if needed. Since you don’t have accurate information about newsletter opens anymore, they’re no longer a good trigger to use for lead scoring or upselling campaigns, for example.

To create effective automation chains, use newsletter clicks as a trigger instead. One could argue that clicks were a better option even before the new feature, as they’re probably a more accurate indicator of whether the reader got interested in your content or not.

If you don’t utilize marketing automation yet, learn more about the topic in our article Marketing Automation – How to Get Started.

3. Use forms to collect information about the subscribers’ location

Many online users don’t like to share their location unless it makes the user experience better. For example, when ordering a cab or planning your route, sharing your location while using an app can make your life easier. However, when you’re on Facebook or browsing through an online store, this often isn’t the case.

Users often turn their location services or GPS off on their devices or hide their location by using a Virtual Private Network (VPN) software, for example. It’s therefore very likely that many users will turn the Mail Privacy Protection feature on.

Digital marketers constantly measure the results of their marketing efforts. If you have A/B tested your subject lines for years, you probably already know how using different kinds of language or including emojis or numbers affect the open rates of your newsletters.

If you’ve established what works for your target audience, trust your data and keep doing what you do!

Absolutely! Email marketing is not losing its popularity due to the new feature, and its ROI is still among the highest out of all digital marketing channels.

Even though the effectiveness of digital marketing lies in the fact that almost everything we do is measurable in one way or another, us marketers must adapt to the changing attitudes of online users. Just because we cannot track all user activity, it doesn’t mean that we can’t keep on achieving excellent results with email marketing.

Learn how to write better subject lines and increase your CTR 📝

Why Should You Use WhatsApp Together with Marketing Automation?