To cut right to the chase: a media analysis is a comprehensive report done by an individual Media Analyst or a team of professionals on a specific subject, such as the public image of an organization.

Media analysis is a valuable tool for an organization or a company to find out about their visibility in the media, about the tone that is used when referred to them and also about very particular issues that might be tied to an event in time, a season or a crisis.

In this article, we take a deep dive into the world of media analyses and how your organization could benefit from them.

1. Media analysts get to work

The public image of an organization examined quarterly or yearly

The quantity and quality of the media coverage that an organization has gained within a certain period of time. A very common to be used in this type of media analysis is a quarter. This allows companies quicker access to information to react and make corrective actions if needed, such as send certain types of press releases. A yearly analysis, on the other hand, is a way for companies to recap the previous year.

All the mentions of the analyzed organization will be taken into account, no matter how small. This gives an overview of how much media coverage your organization has gained. This naturally is even more telling when there is a comparative element in the analysis, such as a competitor.

All the media coverage related to an organization during a crisis

It is a very likely scenario that an organization might want to know more about what kind of publicity they gain during a time of crisis. As an example, an organization that has been on the news for some contradictory policies or comments wants to map out the situation with a media analysis.

All the media coverage related to an organization during an event (sporting event, festival)

It is also very plausible that an organization might be very interested in how they are portrayed during an event that is related to their industry or otherwise to their operating field. As an example, a sports brand might want to see their media coverage during the Olympics or a record company during summer festivals.

The relation of an organization to some phenomenon/phenomena

Organizations might also want to do media analyses regarding a phenomenon in society. This phenomenon could be something that is happening currently – such as a strike, a change in the political atmosphere, or something related to popular culture.

A media analysis could also be focused entirely on a phenomenon, as opposed to an organization’s relation to it. This type of analysis would only be done if this phenomenon or event or crisis would be extremely beneficial to know about on its own. 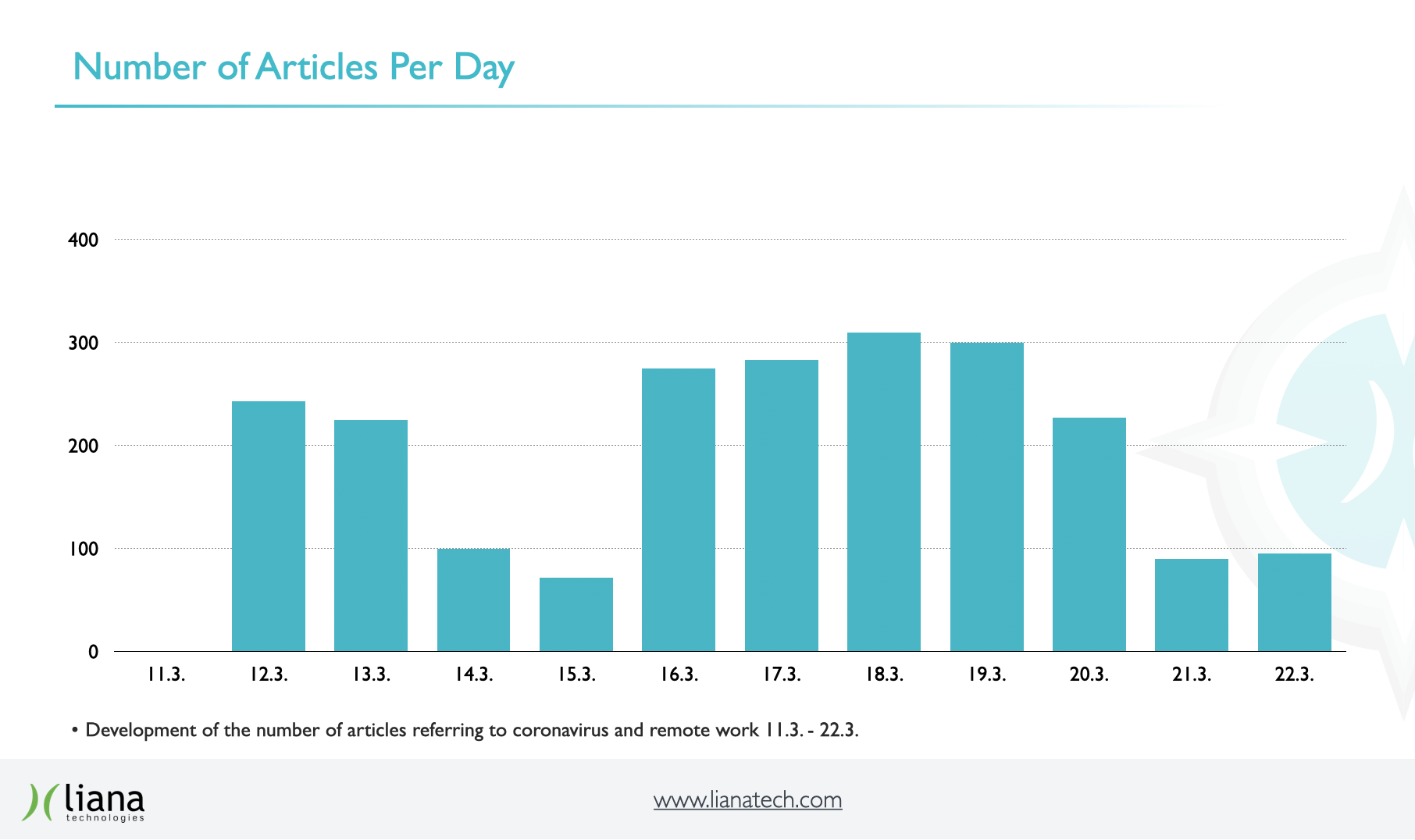 Liana Technologies did a quick media analysis on the development of articles referring to coronavirus and remote work.

Media coverage compared to a competitor’s

A comparative analysis is quite often included in a media analysis, including information about a competitor’s media coverage. This gives a concrete way to analyze your organization’s public image and the number of articles written related to you compared to your competitor.

A tone of the articles can also be determined in the analysis and this is seen as a very beneficial part of the analysis by many organizations.

A combination of the abovementioned

Once it has been defined what type of information is sought after, the media analyst assigned to the task starts to meticulously go through the hits from the media monitoring tool. After this, it’s time to draw conclusions to be included in the analysis.

The findings of the analysis can be presented with different kinds of graphics that depict the information in the best way possible. The findings from the media monitors are called hits and the hits can be shown accumulated monthly or quarterly, for example.

One good way to present the data is to show hit graphs so that the peaks when there are a lot of hits in the monitor can be seen from the graph. Explanatory texts are added to the peaks so that it’s clear from the analysis why there are peaks. Other data that can be shown in the analysis:

Top 10 media list according to where the hits come from

A listing, Top 10 or Top 15 even, of the media outlets where the hits come from is beneficial for organizations to see. This is very much tied to the next point.

The regional distribution of publicity

Graphs are a very thorough way to present the regional distribution of publicity. 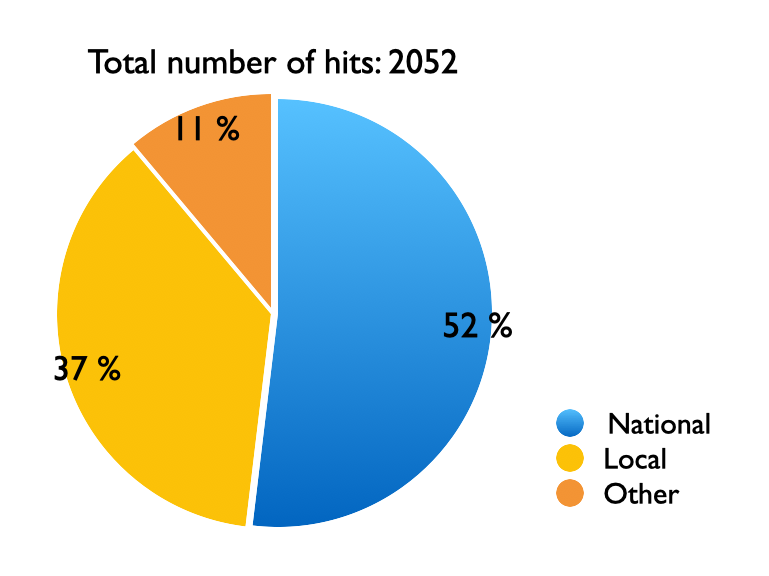 Global publicity can also be tracked if the monitor tool in use has international media, blog, and discussion forum sources.

The facsimile editions of newspapers can be treated as similar sources in the analysis or they can be examined separately. How to go about it really depends on what the organization in question wants to find out in the analysis.

Reach can be counted from the sources

It might be of interest to demonstrate the reach of all the publicity. The online media reach is formed by multiplying the monthly number of visitors to each individual media website by the number of hits in each media, and finally, the numbers are added together. 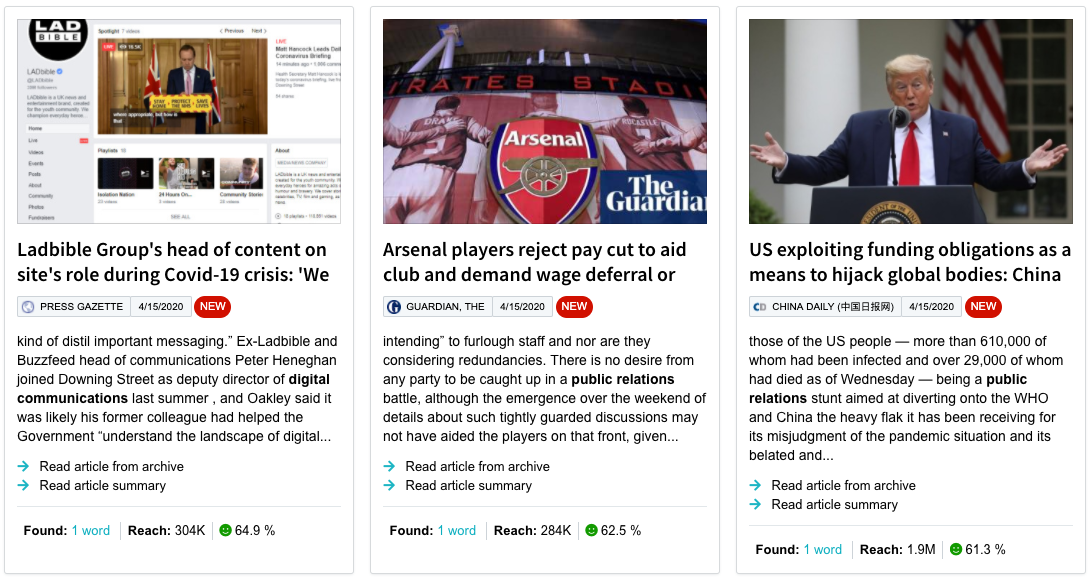 LianaMonitor shows the reach of the articles.

Usually included in a media analysis are some news pieces that illustrate the analyzed material in the best way.

It might be of interest to your organization to examine which persons have been in the public eye and quoted in magazines. This can also be one part of the media analysis.

Themes in relation to the organization

Different themes can be taken into inspection in the analysis and determine where the organization stands regarding these themes. Finnish Cyclists’ Federation's media analysis by Liana Technologies dove into the media visibility that cycling had gathered during 2019. In the analysis, cycling was the main theme and it was examined through nine other themes, such as infrastructure, health, and the environment.

The organization as a primary or secondary agent

It can also be analyzed whether an organization is acting as the primary agent in publications. Being a primary agent in relation to certain themes might indicate a key opinion leader status.

The most common words from hits

Finding out what are the most common words used in the articles that produce hits can be very telling of the themes an organization is being related to.

Once a media analysis for an organization has been done for one year, it makes a lot of sense to do it the following year as well. With the previous year’s data already existing, it is very fruitful to do a comparison between the years.

It is possible to make a media analysis from social media sources in a similar fashion as from journalistic online media. On social media, the focus usually shifts from themes in hits to individual users that are most active on certain social media platforms. These active users can be examined on Facebook, Twitter, Instagram or YouTube.

The same topics often appear in both journalistic and social media but while journalistic media is professional reporting, social media consists of comments from everyone willing to participate in the discussion.

Media analysis can be a vital element in demonstrating the visibility and image of a public organization. The communications department can utilize the media analysis report to showcase the organization’s public image to the management.

In turbulent times, a media analysis can be done on very short notice about how a crisis has developed, what has been written about it and what part has your organization played in the news about the crisis. The focus can be the number of news pieces, the media outlets, or the tone when there is a possibility to monitor that.

A quickly done media analysis can also provide some crucial information when a new product or service has been launched and you need to know how it was received. These kinds of actions on a quick cycle can give your organization the needed data for you to make adjustments to your communications.

Utilizing media analyses is a part of a bigger movement in marketing and communications. That movement is data-driven. Media analysis can, and dare I say will provide valuable information that you can base decisions on in the future.

Get to know our Services better

Did you enjoy this article?
Give it a thumbs up!
Fanni Mäki

Fanni Mäki works as a Communications Specialist at Liana Technologies. She is actively involved with creating content in different formats, such as articles, webinars, and videos. On her free time, Fanni is a couch potato and a movie buff who occasionally runs a marathon.

Fanni Mäki works as a Communications Specialist at Liana Technologies. She is actively involved with creating content in different formats, such as articles, webinars, and videos. On her free time, Fanni is a couch potato and a movie buff who occasionally runs a marathon.