The Association of Products and Services Trade ETU helps trade industry operators succeed in Finland and internationally. ETU represents 13 industries and approximately 400 member companies in the multi-channel trade in professional and consumer products and services.

ETU implemented a massive brand and strategy reform to update their image and goals to better meet current needs. At the same time, the association decided to digitize its activities to increase the effectiveness of its advocacy work. This reform was implemented with Liana®Cloud.

The goal for digitizing was to activate communications and to increase the visibility of ETU and the industries they represent. ETU also wanted to identify and effectively leverage the possibilities of influencing in media discussions.

Today, digitizing is the only way to minimize the amount of manual work. If the channels are not in order and tools are missing, we are unable to function effectively.

ETU’s website, made with Liana's website solution, stands out from the crowd with its well-functioning structure and an impressive visual appearance. The newsroom was transformed to the front page of the website to highlight the association's important news, events and industry news. 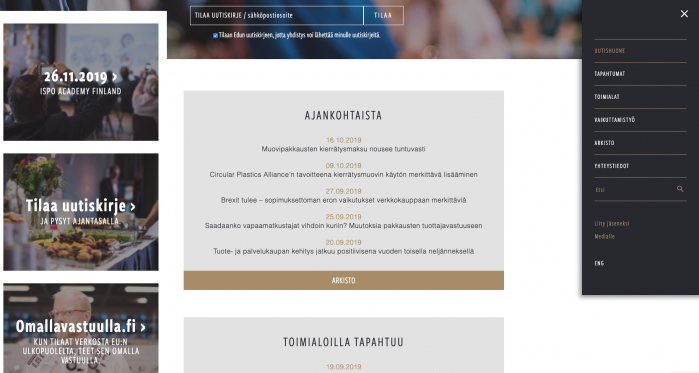 Next, the association aims to expand its newsletter communications to the influencers of the industry, and to also get authorities and decision makers as newsletter subscribers.

Our newsroom became exactly what we wanted and we have received very good feedback on it. Especially the events revoke a lot of questions, and now they can be easily found from the front page.

Informing has proven to be an effective channel of influence, through which ETU has gained more visibility and increased media interest in its operations. With the help of Liana’s press release distribution service also the member organisations get their voice heard. For small organisations, Liana’s press release service is vitally important way to facilitate informing.

Communications Manager Minna Wikström from ETU says that there has been a major increase in the amount of media contacts due to active informing. The leaders of ETU’s industries receive a large amount of contacts about deliveries because of frequent communications.

Detailed categories in Liana’s press release distribution service makes it easy to choose the right recipients. With the help of analytics, the press releases can be targeted even better to those who are interested.

Media monitoring supports the active communications efforts of ETU. The association uses Liana's media monitoring tool to follow its own visibility and the media debate in different industries. The tool helps ETU to debate actively, identify places of influence and react to rapidly changing situations.

ETU has about 40 media monitors in progress, which accrue about 40 000 hits in a year. Despite the massive amount of data, it is easy to organize in Liana’s media monitoring service. The association uses monitoring hits to make reports and summaries and sends packages that are appropriate for each industry.

The whole of communications in good possession

Liana®Cloud helps ETU to implement and develop its own communications work. The tools work seamlessly together – the enormous amount of data that accumulates in them is parsed into an easily manageable format, so the association can utilize the data efficiently.

Centralizing services for one technology provider has also played a major role in risk management in a small organization. When all functions are on the same system, the association knows where to search for help when needed.

I want to especially thank Liana’s support, who handles issues very well and fast. The chat function is particularly handy; you usually get the answer to the problem in one sitting.

When to choose WordPress? Strengths, weaknesses and who the platform is best suited for

Webinar recording: Things you need to know about SEO to start getting results